Redlands is a city which seems to always have something to offer. From the many annual events the city hosts (which can be seen under the “Events” section of the “Redlands” tab), to the constant opportunity for fun presented by many of the cities businesses, there’s never a reason to be bored in this town. Below you can find a very brief list of just some of the many different things there are to do, see, or visit in this amazing town of ours. 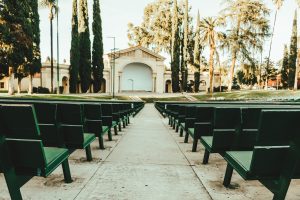 Since its inception in 1924, the Bowl has been a special place in Redlands for families, friends, and music-lovers of all ages and backgrounds to gather and enjoy its superb programs. The Redlands Bowl Performing Arts (RBPA), has served the city of Redlands and the Inland Empire region by providing quality performing arts to the community free of admission charge via their core program, the Redlands Bowl Summer Music Festival. It stands today as one of the cities greatest attractions.

The University of Redlands 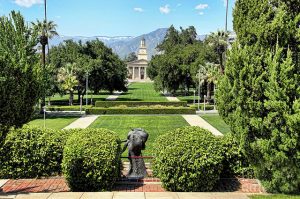 The University of Redlands is according to some, perhaps one of the most beautiful attractions in the city. The University is over one hundred years old and has been exceptionally well maintained over the years. The schools Administrative and church buildings stand proudly over much of the campus and face one another, separated by a large green lawn full of lush trees. It is an unquestionably an absolute must see for anyone new to the area.

There are over 18 established parks across 253 acres of land in place throughout the city of Redlands. There are also a number of different trails for hiking offered by the city such as those throughout the San Timoteo Canyon Nature Sanctuary and the Orange Blossom Trail. A complete list of all the different parks and trails, including maps highlighting the exact location of each, can be found on the city’s website using the following link: cityofredlands.org/parks-and-recreation. In addition to this, more information about each park can also be found under the “Parks” section of the “Explore” tab at the top of this page.

This 1930s structure commemorates the life of Abraham Lincoln with artwork & exhibits. 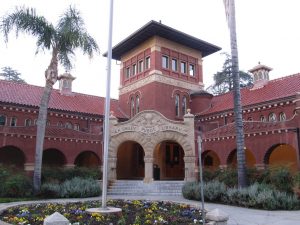 Established in 1894, A.K. Smiley Public Library is a historic landmark which has served generations of patrons in the City of Redlands and beyond. 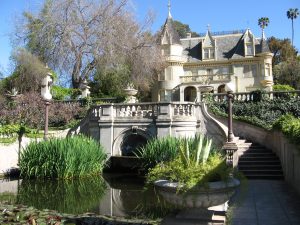 Kimberly Crest House & Gardens is a 6-¼ acre estate in Redlands, CA featuring a Victorian Chateau and Italian Renaissance styled gardens. The interior of the house serves as a museum offering both public and private tours. The gardens are utilized for public events and rented for weddings and private events. 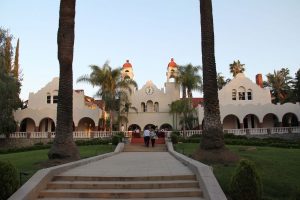 Built in 1901 by mineral magnate Albert Burrage as a holiday home to escape East Coast winters and entertain fellow aristocrats, the mansion has served various owners as a private residence, a convent, and a rental facility for receptions and weddings. Redlands native Tim Rochford purchased the property in late 2007, not only to preserve the mansion, but also with the intention of dedicating it to noncommercial use that benefits children in need within our community.

Morey Mansion was built in 1890 by early Redlands residents David and Sarah More. It has gone through numerous different owners throughout the years and is currently under private ownership. It stands today as one of the most memorable historical landmarks in the city.

For over one hundred years the historical downtown Redlands train station has served as a charming attraction for visitors to come and take many memorable photos. In recent years the station has undergone numerous renovations and plans to reopen soon as a functional stop which will connect the University of Redlands to Downtown San Bernardino. 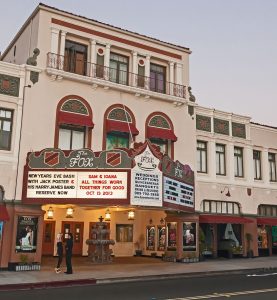 The Redlands Fox was built in 1927 and opened officially on December 28, 1928. It was built in a Spanish Colonial Revival style and maintains its integrity in the lobbies upstairs and downstairs, which were lovingly restored. It now serves as a venue for the public to rent out for various events.

Built in 1890, the current Mitten Building was once used as both a citrus packing house and a letter factory before being renovated to its current state. This attractive building now serves as both a restaurant and venue which can be rented out. 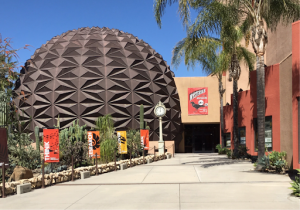 The San Bernardino County Museum, in Redlands, California, is a regional museum with exhibits and collections in cultural and natural history. Special exhibits, the Exploration Station live animal discovery center, extensive research collections, and public programs for adults, families, students, and children are all part of the museum experience.

Hillside Memorial Park was established in 1886 by local pioneers Frank Brown and Edward Judson to serve the needs of the community of Redlands. The beautiful cemetery has been owned and operated by the City of Redlands since 1918. It is located in the southwestern section of the City in an area of scenic rolling hills and has been the chosen resting place for some celebrities throughout the years. Its grounds have an approximate 53 acres making Hillside Memorial Park the largest city owned cemetery in California.

Built in 1902, this home is constructed in the once popular Italianate style of architecture. A porch fronts the Palm Avenue entrance decorated by a balustrade, Roman arches, and eight Corinthian columns. The two-story home is crowned by a four-story tower and Italian brackets have been employed lavishly under all the eaves of the home. It is truly one of the most gorgeous homes in town and a must see for any history buff.

Built in the 1800s over an Indian burial ground, the Barton Mansion has gone on to achieve the haunted house trifecta, being the site of both an insane asylum and a jail. It’s now been renovated into an industrial office space. It was built as a vernacular house during 1866-67, was renovated to Greek Revival c. 1871-72, and renovated again into Second Empire style in 1893.

Established as an adjunct to Mission San Gabriel Arcángel, this is often said to be part of a second, inland chain of missions. At the site is a museum, small chapel, and gatehouse. 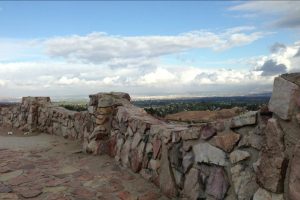 Located at the end of Panorama Drive in Redlands, and looming just above the I-10 freeway, this beautiful lookout offers some of the most breathtaking and unforgettable views in the city. 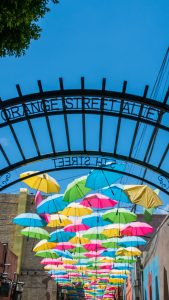 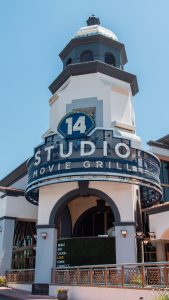 Formerly a Krikorian Premiere Theater, Studio Movie Grill Redlands is located just on the corner of Eureka St. and Oriental Ave. within an unforgettable, historical building landmark. This freshly renovated theater offers guests the opportunity to watch all the latest blockbusters from the comfort of new, leather recliners. 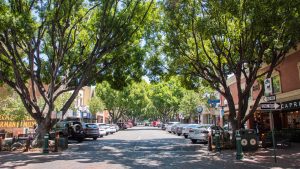 Built during the late 1890’s, downtown Redlands is a vibrant and exciting place to be. It is home to some of the city’s most historic monuments and offers numerous different attractions beyond just shopping and dining.

Redlands Country Club is the oldest member owned country club in the West. Established in 1896, our 18-hole PGA Championship golf course is considered one of the finest in Southern California. It is beautifully landscaped with mature oak trees and is nestled in the hills of Redlands with panoramic views of the surrounding mountains. We know that you will be very impressed when you take the opportunity to play it.

The Ritual Brewing Co. offers twenty-four different taps which visitors are always welcome to come and try while enjoying the comfortable atmosphere provided. Tours of the Taproom are available and provided by knowledgeable “Beer Guides” who are happy to answer any questions you may have.

Hangar 24 is a brewery which first began in Redlands and has since grown to become a brand which is sold nationwide. Their first brewery, in Redlands, offers a nice tasting room in which guests can sample rotating beers or food from local eateries. They also host live music shows on their patio and offer an annual airshow which draws in guests from all around.

Bootleggers brewery originally started in Fullerton, California and has since opened up an attractive tasting room in Redlands.

Splash Kingdom Waterpark is an Egyptian-beach themed water park, trampoline park, and concert venue. It is the largest waterpark in the Inland Empire. If you’re looking for a fun day with friends or family then look no further than Splash Kindgom!

Esri is an international supplier of geographic information system software, web GIS and geodatabase management applications. The company is headquartered in Redlands, California. The company was founded as the Environmental Systems Research Institute in 1969 as a land-use consulting firm. ESRI, being a billion dollar company, is one of the largest companies to operate out of the city and is one which employs thousands of people from the local community. The ESRI facility has been described by many as almost serene for the large amount of lush and green vegetation which surrounds the complex. ESRI also offers many things to people who are not part of the company, such as lectures by famous guest speakers and a café which is open to the public.

Empire Bowl has become one of the most popular and long-standing venues in Redlands. They feature twenty-four bowling lanes, gaming arcade, snack bar, cocktail lounge and differently themed events each week.

YMCA of the East Valley 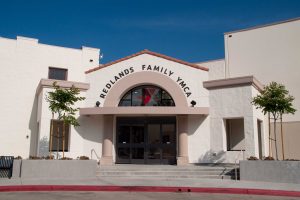 The East Valley YMCA has been a part of Redlands for many years and continues to play an active role in supporting the surrounding community. The YMCA offers an immense number of programs for visitors to enjoy including a full gym, pool, basketball and racquetball courts, training classes, summer programs, and child care among many other things. 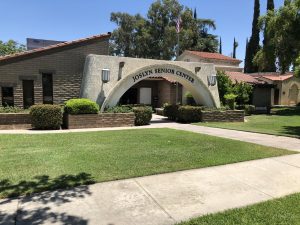 The Joslyn Senior Center offers adults 55 years of age or older the opportunity to interact with other seniors in a warm and caring environment. These facilities are dedicated to offering a variety of classes and activities including games, arts and crafts, computer classes, exercise and wellness programs, and more. The Senior Services Division also hosts day trips to various locations throughout Southern California.

The Redlands Community Center provides a range of programs, events and informational resources for people of all ages. Classes and seminars are taught by independent instructors, along with volunteer coaches who help facilitate sports programs.

Vector Escape Games is here to bring the fun. With energetic staff and actors, they strive to bring the next generation of escape rooms. They want to immerse all players in their games to make it feel like the real deal.

Open Door Escape Games provide an interactive entertainment experience where you have 60 minutes to use your intellect and wit to work as a team with the other players to solve puzzles, decipher clues and ultimately find the key to escape the room before time runs out.