COOPS COINS IS TO BECOME BRIGGS AND COOPS COINS
Longtime co-owner Randy Briggs will finally add his name to the storefront, where he works alongside his son as an expert numismatist, buying and selling coins, gold, silver, stamps, currency and other collectibles.

Fred Coops founded the business in 1935. Briggs started working there in 1966 when he was 16 and still in high school, and has worked there continuously since then.

In 1977 Fred Coops, Randy Briggs and John Dudding incorporated to “Fred Coops and Co. Inc.” Coops was the chairman; Briggs was president and Dudding was the vice president.

“Not much changed,” said Briggs speaking of the newly formed corporation. “The day after we all did the same things we did the day before.” Coops continued working until he died in 1992 and Briggs and Dudding became co-owners.

In 1995 the shop moved to its current location in Redlands from the Central City Mall in San Bernardino.

Since the retirement of Dudding in 2015, Briggs and his wife Lauren have been the sole owners. Though Fred Coops long ago left the business, his name will remain to honor him and the legacy he began. “The Coops name is important — in this industry and in this community,” Lauren said, “It’s synonymous with integrity and knowledge.”

Briggs and Coops has a new logo, new signage and a new website.

“Our goal is that the business will stay in the family,” Randy Briggs said. Their son, JR, works there full time, and has for many years. Recognizing the transition from himself to his son, Randy said, “I’m an old-mismatist and he’s a new-mismatist.” Randy’s joke is quite an understatement, as he was recently awarded a 50-year membership pin by the American Numismatic Association.

“Our sons have grown up in this business and have the skills and expertise to work there, especially given the man who is teaching them,” Lauren said, “No one can match my husband’s 50 years of experience, but my son has the knowledge and character to carry on this legacy.”
Our History
FROM HUMBLE BEGGININGS
The early years were difficult for Fred, Jr. but he stuck with it and the business grew. Except for a few years during the war when relatives ran his store while he was in the Army Air Corps, Fred operated his company continuously from 1935 until his death in January 1992. Coins and paper money were added to be the larger part of the business.

By the mid-1960’s Fred realized the need for more employees and it was at this time that John Dudding (1964) and Randy Briggs (1966) entered the business. In 1976 the company incorporated.

After growing and serving customers for decades Randy and John relocated Collector Galleries to Redlands, CA where the store has flourished. Expanding to bullion in addition to coins, stamps and currency, Collector Galleries has been able to adapt to the current times and find a place in any market. We are proud to be able to continue the tradition of the OLDEST coin and stamp retailer in the country under the same ownership. 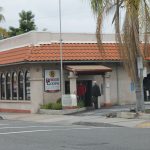