The Inland Master Chorale brings together more than seventy talented vocalists from throughout the Inland Empire. First formed in March 1980, the chorale has since provided exciting, quality musical experiences for audiences in the Inland Empire, California, Washington, England, Canada, Australia and New Zealand. Founding Director Roger W. Duffer led the group for 37 years. Under Maestro Duffer’s direction, the chorale has won awards, critical acclaim, gained national and international recognition. In 2017, Dr. Joseph Modica was selected to carry on the tradition which has established the Chorale as one of the most accomplished choral groups in Southern California.
The Inland Master Chorale is a division of Inland Chorale Music Education, Inc., a 501(c)3 educational, non-profit corporation.

Redlands CA US
Get directions 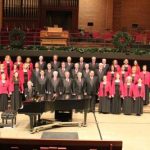