The Redlands Bicycle Classic is the longest continuous running stage race in American bike racing. From humble beginnings on a Memorial Day weekend in 1985 hosting future stars for the Olympics, Tour de France, and world championships, the Redlands Classic has earned it’s position in history “Where Legends Are Born”.

Each year, the city of Redlands and surrounding communities open their homes and pour into the streets to cheer on the world-class athletes the race draws each year.

The Redlands Classic all-volunteer organizing committee works year round to create an event at the elite level of the sport. The event is also host to major fundraising events for many local community service groups. The Kiwanis, Rotary, and Boy Scouts all benefit from the event.

In addition to world-class racing, a healthy lifestyle festival featuring vendors to benefit healthy living is hosted in downtown Redlands on the final two days.

Keep an eye on the money. The Redlands Bicycle Classic now holds a purse upward of a combined $40,000 for men and women. There were days that it was much less.

The purse was a mere $13,650. That was for the entire field, consisting of just men.

It was the inaugural Redlands Bicycle Classic, less than a full year after the Los Angeles Summer Olympics. U.S. legends Alexi Grewal, Steve Hegg, Roy Knickman, Thurlow Rogers were up against some strong cyclists from foreign nations. By the time Redlands came up with its plan to host a professional bike race, most of them were off to other continents to seek cycling dynasties.

U.S. team members Rogers and Hegg showed up in Redlands to a three-day, four-stage event over the Memorial Day weekend. Racing for ICN-La Grange, the quartet stole the show – accounting for all four stages. 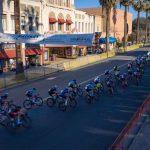